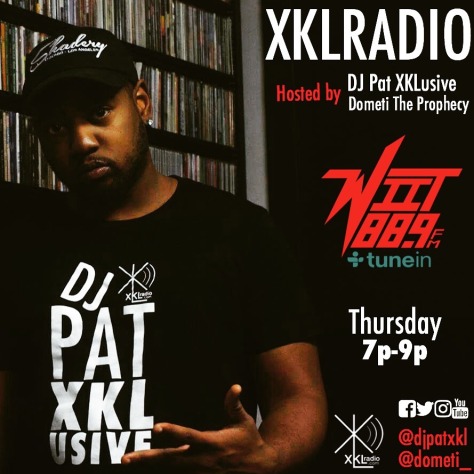 YOU CAN LISTEN TO THE XKLRADIO The Podcast

EVERY THURSDAY AT 7-9P

XKLradio is the moment you will hear, your favorite song but also, a unfamiliar song off the album, or the unsung artists that’s not on mainstream radio, but has a xklusive sound and its own fan base.

XKLradio is a music/talk hybrid playing the latest, hottest, xklusive music in hip-hop, R&B, top 40 etc, with xklusive news, conversation, and guest. XKLradio is also an opportunity for underground/ local artists to be heard and have records broken, hosted by DJ PAT Xklusive.

XKLusive radio “the show “re-established” itself on Krui 89.7fm & Krui The Lab in 2009-14.  In 2015, The show has joined a new radio home WIIT 88.9fm (radio.iit.edu) adding co-host Dometi the Prophecy, young journalist and hip-hop Em-cee. Make sure you tune in Every Thursday (7p-9p) Also, on the TuneIN app

This episode of XKLRADIO features Chicago Streets Hip Hop Legend “Parkay” teeling us his comeback story, from being shot 6 times 2 yrs ago, and now back with New Music, also featuring Bump J. Also, we talk to ExEll who breaks new single “Money Problems” and Bruus, young Artist and producer working with Parkay and Bump J. Follow these artists @parkay @ExELL @Bruus via Instagram, Twitter, and find their music via itunes, Spotify, Spinrilla, and more.

This episode features Chitunda Tillman, discussing how he wrote the original script for the hit movie “John Q”, and how hollywood stole his story, discrediting Tillman, also how his book explains his entire Lawsuit journey with Hollywood until this day, and more. Check out Tillman’s full story at TheRealJohnQ.com.

This episode of XKLRadio features Hip Hop Legend Roxanne Shante, talking about her career, new bio pic coming this Summer, being a young mother, thoughts on Sheather, and more. Follow @imroxanneshante via Instagram/Twitter.

This episode of XKLRadio features Pozelini, Philly Rapper talking about his recent release of Street Lebron and more. Hosted by DJ Pat XKLusive and Dometi The Prophecy. Follow @Pozelini via Instagram/Twitter/ Soundcloud

This episode of XKLRadio features “Mark Wallace”, who heads the “Citizens to Abolish Redlight Cams” in Chicago. Wallace discussed about the organization, and progress against red light cams, real estate, politics and more.

TEK of Smif n Wessun call-in to XKLRadio talking about new music launching on New App “Parallelz”, also being in-studio with 2pac, being best friends with B.I.G, being positive and more!!!
Live on XKLRadio WIIT 88.9fm Hosted by DJ Pat XKLusive and Dometi the Prophecy.

his episode of XKLradio Radio features “YdotGdot” Chicago’s Favorite Nerd, talking about his experiences and dropping his new album “Its About Time”. Follow @YdotGdot via IG New music on SoundCloud.

This episode of XKLusive Radio features Miguel Millett, talking about being an chicago educator who teaches College Success, who have a federal grant for Chicago City College students to help students succeed in college and life. Follow Miguel Millett via LinkedIN/Facebook. Also, For more info on College success contact directlymiguel.millett@gmail.com

Make sure to watch the NBCs The Carmichaels every Sunday 9/8c.

Check out her latest single “Keep Calm Dance to This” on Youtube.

Live Interview w/ The Legendary “Geto Boyz” after their Chicago concert on their recent 2015 tour.